Super Mom …. or not Super Mom

Jason is very much the little ‘prince’ between ‘princesses’ at school.  He is a real little gentleman and most of the girls want to be his friend.

The art of medicine consists of amusing the patient while nature cures the disease. — Voltaire

One of his little friends started getting sick on Wednesday last week and went home from school during the day. Thursday (on his birthday) she went to school though. She was adamant to go to his birthday party. Half way through the party she got a fever though and went home. In the end they had to admit her to hospital and she’s been there since Saturday.

We went to visit her after school yesterday. When we got there, she was looking really pale, sick and very tired. We visited for about 30 minutes when I said it’s time for us to leave. She wanted nothing of that. She wanted Jason to stay. Her dad and I agreed that she is looking better and maybe having him there was a good thing. So he stayed. 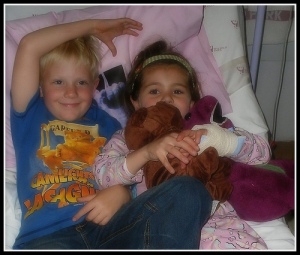 Apparently the nursing staff came to make up her bed but then noticed the two lying in bed together and just left it lol They stayed like this, till I picked him up much later.

I love his relationships with the girls. Quite the gentleman this guy.

The greatest healing therapy is friendship and love.
— Hubert Humphrey

This entry was posted on August 5, 2008 by supermom. It was filed under Jason .

I am mom to three amazing boys Quintus (21), Jason (19) and Zander (15) and a much loved daughter Kyla (18).
They used think that I was supermom and that I had the ability to save their worlds. I hope they still believe that I can.

I have my own accounting practice. I share offices with my dad and even though to the outside world it seems confusing, it works out great for us.

Balancing a full-time job, homeschooling and acting as stay-at-home mom isn't easy BUT we make it work.

We live in South Africa. A country that I love. A country of breath-taking beauty, diverse culture and shocking crime.

Still one of my all time favourite photos ❤️
First and last day of school.
So love this little one.
Because we should all be happy to be at work.